Can You Handle the Truth? You Need Truth to Reach Your Dreams! 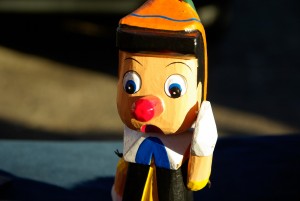 In just one day how many stories, fibs, or untruths might you tell? It’s easier to hear them labeled as fibs than lies; that sounds more light and breezy, even a bit childlike. We don’t like to hear that we tell lies-fibs are the same, but that seems more acceptable. We don’t like hearing that we tell lies, but we do tell them. According to a study conducted by the University of Massachusetts, on average we lie 3 times per every 10 minutes of conversation; 60% have a hard time without lying at least once in 10 minutes. Most lies are harmless, like you might say: “This meal is great” when it’s not that great, or “I’m doing good!” by what has come to be almost automatic when someone asks you how you’re doing when you’re actually not that good at all. That’s a lot of lies in one day; and that’s just the small lies. This statistic doesn’t include the larger lies we tell to others or to ourselves.

How often in a day do you tell yourself or others that you’re happier at your job than you are? How often do you say that you’re doing better at that job than you actually are doing? For how long have you wanted to change what it is that you do for a living and haven’t done a thing? Has it been a year, two years, five years? Are you making charges on your credit card that you can’t afford to pay? Do you tell yourself you’ll pay it back eventually, when you get “your better job”? Perhaps you’re in a relationship and your significant other doesn’t even know how much debt you’ve accumulated? Are you afraid of moving from one job to another because you think you need qualifications you don’t have or can’t afford to pay for, so you lie and say you like the job you have, more than actually do? It’s okay to keep a job because it’s better to have a job than not to have one, but be honest with yourself and those around you. You can’t move forward towards your dreams if you don’t tell the truth to yourself and to those you care about and care about you. Once you face the situation you can begin to make a plan for your future. It will take time, but you will be moving in a positive direction.

Not everyone you know has to know everything, you know those different people on your list. Not telling every little everything is not the same as lying. What happens when you are telling untruths even to your inner circle is that you are continuing to live those lies…you are not working to fix them. The closest ones around you don’t know that you want to change things and so the lie perpetuates.

Its time to grow up! Oh right, thats what I would tell Peter Pan, not Pinocchio. No more lies. Its time for change!

If you want to tell someone they look good even though you may feel they’ve looked better, there’s no harm in that…unless that person is about to step onto some public platform and needs your honest opinion or face embarrassment. The difference is when you maintain your own rather public platform of falsehood. If you declare your success, happiness and knowledge even though you don’t have it, you will be the big loser. You have a responsibility to yourself and those closest to you to be faithful to what it is you really feel, really know and really want. Once you can really look at that, the whole world will open up for you.  Have a most excellent day!