Remember when getting older felt like a good thing? We don’t feel that way now! Ageisim is a problem. 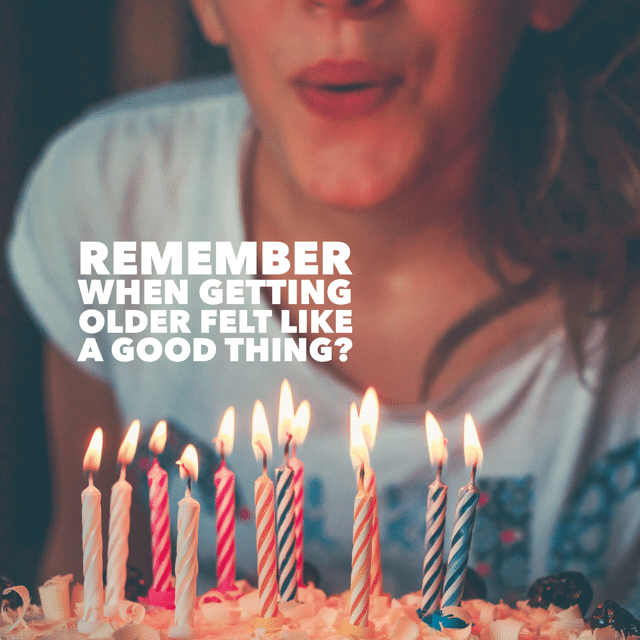 What is a 45 year-old’s reality when it comes to their career today? Will it be the same as a 35-year old’s tomorrow? We feel in business as though we have to avoid our age. We may have avoided discussing our age in the past because of choice and pride in our appearance, but not from fear of losing our job.

A Bankrate.com survey asked “millennials”, classified as Americans ages 18 to 37, what the perfect time to retire would be. Their answer: 61 years old. That’s probably a good way to think because they may not be hanging on to any job longer than that age. They may have little saved for retirement, but they want to retire early.

Americans who will turn 62 in 2018 (born in 1956) will need to wait until age 66 and four months to claim their full Social Security retirement benefit, which is generally around $1400 a year. We’re presuming Social Security will still be around in 15 or 20 years for “millennials”. It’s better to be the one deciding you feel it’s time to retire than the one being told it’s time for you to decide to leave.

It’s not so easy to see how the future of one’s career is going. You don’t want to hit the age of 35 and begin to feel you need to start finding a “Senior” group to join in order to find the advice of people like yourself to fit in and be welcome.

Ageism is more prominent in some businesses than others. Youth is of vital importance in particular businesses sectors like advertising, marketing, television, publishing, and fashion, where the clients they are looking to attract are predominantly younger.

I am quite sensitive to “ageisim” having myself spent over 20 years in the advertising business. It seems as though more and more frequently people are interested in hiring 25-year old people with 25 years of experience. To protect against the risks and consequences of age discrimination, it’s vital to make the effort to engage in life long learning and to stay up to date in your profession through continuing education classes, seminars, and conferences.

It’s also imperative to stay current with needed technology and that you continue to create relationships with people of all ages throughout your industry. Think about hosting activities to bring people together of all ages in your business. Consider participating in after work happy hours. If that doesn’t appeal, then think about what charity your office is involved in; or think about offering to head up one which you’re already connected or have a passion. You can be imaginative and think about possible theme parties based on sports or award shows (like the EMMYS or the OSCARS), there are wine parties and all kinds of networking parties if you put your mind to it. It’s most important to blur the age lines.

“The future depends on what you do today” – Mahatma Gandhi

We would like to think that ageism isn’t out there…or it’s only there affecting a small percentage, but that’s not true. If you are on social media, if you scan the professional media sites, if you talk to friends, have been personally affected or know others that have encountered horror stories from job seekers and/or employees who feel they are being treated as “oldsters”, debilitated, or unsuitable for work…you know it’s out there in the world. They’ve been outright told they’re too old, over qualified, will cost too much, won’t fit in with the “cool” younger workers, that they should dumb down their experience when seeking new job opportunities, and they’re consistently finding that they are just plain old down and out when applying for jobs for which they are absolutely fully qualified.

For employed individuals of this particular demographic, examples include being 100% qualified for a promotion but being passed over in favor of a younger and less experienced worker, cutting job duties, cutting hours, being cut out of meetings, being replaced by a less qualified and lower cost person, threatening their pension, being forced into early retirement, “job elimination” and put out to pasture with the only seemingly available prospect for employment that of a meeter and greeter at a BJ’s or Costco somewhere. This problem is not imaginary!

If you feel as though you’ve been a victim of ageism you could go the more legal route. Or you could choose to apply your individual business expertise and passion to finding your new career path. Many older entrepreneurs draw from a lifetime of experience and insight that has allowed them to achieve amazing independent success.

“Our greatest weakness lies in giving up. The most certain way to succeed is always to try just one more time.” – Thomas Edison

These are several fortifying reasons why “it ain’t over until it’s over”, and that the “senior” run startups succeed:

About ten years ago, not long before it became necessary for me to leave the advertising business due to illness, I had already begun to feel I was among the “oldsters”…I was around 42. I was beginning to think of what my next business would be. What I didn’t know of course as I was doing my thinking is that my step out of advertising was going to end up being so urgent. Today as a transition career couch I help people who are thinking about changing their own careers, often those people come from advertising.