My Manifesto…Everything that Happens Helps You Grow, Even if it’s Hard to See Right Now 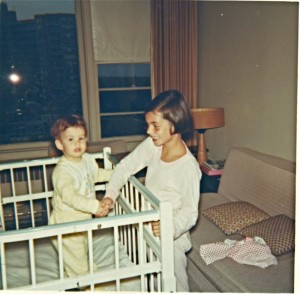 “That which does not kill us makes us stronger” ~Friedrich Nietzsche

When I was too young to think about what it took to make my “dreams” come true; I’d think about my life the way I did the ones I saw in movies or on television, or that I read about in books. I thought that if you wanted something, it would happen. Around the age of seven I received my first blast of reality!

I was watching Captain Kangaroo early one morning (par usual), and without thought scratched my eye. That moment changed my world. My eye started to bleed and within a short period of time turned my light colored shirt to a reddish pink. No amount of cotton balls stopped my eye from bleeding. At seven it didn’t take much bleeding to be scary, and this was much more than a little. I was scared and the look on my Mom’s face confirmed that it was definitely something to be scared about. The remainder of this event is a bit of blur, maybe due to trauma or perhaps it’s the number of years that have passed. A few of the specifics have lingered. My Mom was told during our emergency visit at the pediatrician, that I should see a pediatric hematologist. A what? The pediatrician said “I’m almost positive it’s not leukemia”. He was right. I was diagnosed with a complicated but curable blood illness. It was a name too difficult for almost anybody to pronounce…definitely too difficult for a seven year old. I was told I had NO CLOTTING FACTOR! If I bumped or scratched myself-I would bleed. That hematologist (blood doctor) and I became quite friendly over the next year. We saw each other two to three times a week to test for what I came to know and hope for during each visit… an increase in my clotting factor. During that ye

ar I took large dosages of medicine which doubled my weight.I was no longer allowed to go out and play, “because if I got bumped, it would make things worse.” “Worse? How could things be worse?” My parents had to escort me in and out of school for the same reasons. I felt sad, sore, lonely and sick. Being seven years old was not about blocks and games, but doctors and needles. A year later I was better, but I was much older than my actual age. I felt much more aware of both my inner and outer world. Life seemed more complicated than it did before I became sick. My life’s real story seemed a whole lot bigger now than the one I saw on television or read about in books. What a difference a year can make. By the time I finished treatment at the age of eight, I had the thoughts of someone much older than my actual age. I also felt like a winner! I felt I was capable of accomplishing what I put my mind to; I wanted to enjoy everything I did, because I did’t know how long I’d have that time. No one spoke to me about longevity, I just felt…“you never know”. Even then I believed…

What we go through in life influences our choices. By the time I was in my junior year of high school and had to decide like lots of other kids, “what do I want to be when I grow up? It felt funny. It felt funny because I already felt sort of grown up, but it also funny because even if you haven’t been through any extraordinary growing up circumstances, it seemed too early to be asked to decide at seventeen what you want to do for the rest of your life.

Way back then, I had ideas of being either a film director…or a doctor. Eeny, meeny, miny, moe. I was a fan of theater, TV and movies. I also liked the idea of becoming a doctor. Afterall, I’d been studying it as a patient firsthand since I was young…(er). I’d spent many hours sitting in various doctor’s offices with other patients waiting for a myriad of tests. I had watched a number of different television shows about doctors. Many friends over the years had asked me for advice about medical issues because of my “medical experience”. In my mind I had medical experience. More importantly, I was interested.

Our bedroom after the explosion-the last time we saw it. It was declared an asbestos hazard and we could not re-enter.

When the big choosing day arrived though, I decided to pursue filmmaking, mostly because chemistry wasn’t my forte and my whole family was concerned that I might accidentally overdose someone’s medication one day.  I went to an excellent school, I graduated with ideas, which included making a living. I found a connection to filmmaking doing television commercials. It wasn’t my EXACT plan, but it was a living, which was a big part of the plan. I always liked commercials. I grew up watching tons of them. I could recite some of them by heart. I loved this business. Life continued. I got married. I gave birth to my first daughter. Four months after her happy arrival, our apartment building was assaulted my a Con Edison steampipe explosion in New York City. Fortunately we had all just gone out for a walk fifteen minutes earlier or I most likely wouldn’t be writing this story. Our next door neighbor was killed. Our apartment was in the main trajectory of the blast. This was an enormous metropolitan event and and an enormous personal event, which left us without a place to live for almost a year. We bopped from one temporary living situation to another. All our stuff was destroyed, but we were okay…I thought. A very important element that enabled myself, my husband, and our then very small daughter through this difficult time, was…

So a year later we moved into our final apartment. No more moving. We set things up. It was feeling like home. Our daughter was just past her 1st birthday. I took a drive out to Long Island (about a 30 minute trip), to visit a friend and was having trouble seeing. Everything I was seeing seemed off. I was seeing two of everything. I made an appointment with my doctor the next day, who gave me a prescription for something new called an MRI. They determined I had a “a brain lesion”, which is a fancy name for a brain tumor. I had a 9 hour brain surgery and months of follow up treatment. I had to re-learn how to swallow. One side of my face was paralyzed and there was no guarantee if it would return…it did. I lost the hearing in one ear, I lost 20 lbs; but 7 months later I was alive and I was back to work. I was fortunate.

I continued producing television commercials for over twenty years; I produced more than 800 commercials. I traveled a lot of places. I met lots of people. I worked for others, as well as having the pleasure of owning my own boutique commercial company. I gave birth to my other amazing daughter, we had a family full of pets, we moved a few different times. Things came up (relatively normal things); my husband and I dealt with them. We moved to the suburbs. My oldest daughter was on the cusp of going to college. I could tell the television commercial business was changing. There was less work than there were companies to do that work. I started to think about what I wanted to do next. I was still relatively young careerwise. It was during this time that I started to have trouble swallowing. I have never in my life taken anything for granted. I think of the future, but live in the day. It’s one of the things my life has taught me. I went to the doctor, I had my yearly MRI (it wasn’t so new anymore); I was told my tumor had doubled in size. Even though I had been having an MRI once a year since my first surgery, it hadn’t been compared to the original. It’s growth hadn’t been monitored accurately. I needed to have brain surgery…again. That seven hour surgery confirmed I had a cancerous brain tumor and needed additional treatment. There would be a BIG change in my personal plans. All the attention would be on taking care of my health and getting our oldest daughter off to college. I had been in this place before, I was experienced-this didn’t make it any better…not one little bit. Well, I’m still here, I’ve lived to talk about it, which I’m told by my doctors-is amazing.

In Boston after I completed my 250 mile walk

After I regained my strength, I started to think: What was I going to do next? I knew I wasn’t alone as a person who had been through change. We all go through change. We all have thought at times “How did I get here?” I knew I always wanted to help people. I have a lot of business experience. I decided to create a 250-mile walk to raise funds for brain cancer research. I was looking for inspiration and a feeling of accomplishment. During that walk I spoke at schools and organizations and met people who were going through lots of different things in there lives. They found MY story to be an inspiration. Those people and that walk made me want to become a CAREER LIFE COACH. If you believe you can…YOU CAN! I wanted to spread that to others. It started when I was young and it continues. Many of my dreams have come true. I wanted to show others how to make their dreams happen.

Last thing: Recently I was purging old papers. I found an article about Life Coaching that I had cut out and saved in 2006 when I was researching what my next step on “my life’s road” would be. I had no idea at that point what things would follow. I didn’t know about my illness, or the walk I’d be taking. I had no idea that I’d actually become a Life Coach. To me, finding that article eight years later is a confirmation that my becoming a Life Coach was meant to be…my helping people find their dream career is meant to be.

Be positive. It’s important to have goals, and believe in yourself. Onward not backward. The past is the past. Remember your dreams! You can make them come true!